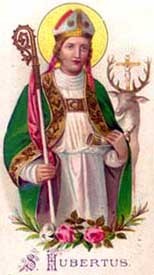 Hubert's representation is a stag bearing a cross or crucifix between its antlers: Hence the Master Hunter's (or Jagermeister's) Badge of Honor.

In fact the bottle cap on an imported bottle of Jagermeister herbal liqueur is a duplication of the Master Hunter's badge. The bottle's label also has the same representation of a stag with a shining cross, suspended between the antlers, as the brand's logo. Surrounding the label is a German phrase, which loosely translated means: "This is the hunter's badge of honor, which he protects and wears as his shield, to guard, while in the fine and honorable profession of hunting; which also honors the Creator and his creations."

Literally translated, Jagermeister means Master Hunter in the German language. The term is applied to those who have rightfully earned the respect of their peers and regular citizens as well. German heritage requires much more of hunters than simply passing an eight-hour safety course before being issued a license. In that country it is a privilege to go afield with a firearm and the sport requires many seasons of apprenticeship.

Following four years of apprenticeship a hunter is then allowed to take the exam for Jagermeister certification. This distinct traditional heritage is from the country that also brought us the legend of Bambi. You'll recall the bad guys in the original Bambi story were "poachers," not hunters. There is no anti-hunting social agenda in Germany since the sport is highly regulated and steeped in tradition. Hunters are welcomed everywhere.

German hunters also participate in extensive rituals following the death of a big game animal taken while hunting, along with other cultural heritages including a toast to the fallen animal itself. Caveman instincts bond all hunters when they're in the field - no matter what modern civilization has done to each person.

Quite possibly those centuries-old traditions are what has evolved into the North American big game hunter's need to participate in some form of ceremony following the harvest. Maybe they are unsure of just where or how it started, but many hunters (including Native Americans) repeat a prayer, or chant, or simply express their joy with a shout of excitement after the shot is confirmed and the animal is down.

Anything from smearing the blood of a freshly harvested deer on your face (similar to war paint) to saying a brief prayer of thanks to loud whoops, or simply firm handshakes all around pretty much describe the range of activities surrounding a freshly harvested deer or elk here in America. It certainly is a rite of passage for a youngster to take their first big game animal and it's an experience they'll never forget.

Regardless, giving thanks to the harvested animal, and to God, for the resulting nourishment must be what it's all about. Respect for the fallen, and seeking a blessing for the meat, and honoring the harvest of one of God's creatures must be the catalyst for these traditions. Of course tagging fresh venison is the object, but preparing for and participating in the hunt is almost as rewarding. Activities surrounding the hunt as well as the camaraderie involved with the "tribe" provide untold pleasure as it creates lasting memories.

It is very inappropriate to desecrate, actually violating the sacredness, of any mounted animal with sunglasses, hats, or cigarettes shoved into a taxidermist's work of art. Humoring people who've never participated in the honor of taking a wild game animal's life is disgusting. Domesticated animals provide suitable protein but they don't enjoy the freedom of the wildness experienced by game animals during their lives in the forests and fields. Our teeth and stomachs convert that deer's living energy into our own and we owe it much deserved respect.

So, if you wish, say a prayer of thanksgiving or ask a blessing of St. Hubert when you harvest your next deer or elk; just remember to honor the harvest of the wild animal and utilize the meat with respect. It died so that you might live.

ST. HUBERT'S VISION IN THE FOREST 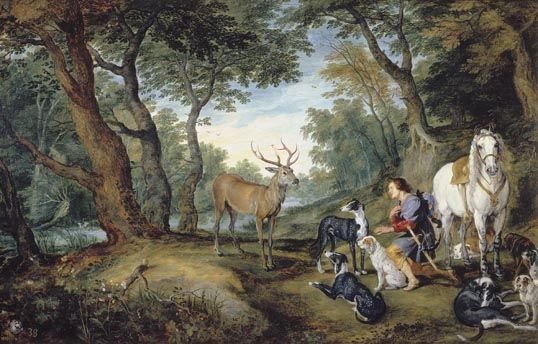 "Almighty God, maker and sustainer of all life, protect all who hunt from danger and from pride. Make us thankful, and careful, for all living things. Grant us joy in the chase, good fellowship with others, and humility at the harvest. And, we pray, open our eyes, that with St Hubert we may see the cross of our Lord Jesus Christ, for it is in him alone that we have hope of a new humanity and new creation perfectly restored in thee. Amen"

(to the slain animal’s spirit)

Life is a circle. At first, we do not exist in this world. Then we are born, grow, and thus live. Then after a while, when we must relinquish our existence in this world, the circle is complete. Some circles are very small, others much larger. We do not much control where the circle starts or ends.

As such, I have not chosen to be predator any more than you have chosen to be prey. The circle of life demands that there be both. I accept that as predator, I have the awesome responsibility of being swift and sure, for carelessness may cause you suffering, and that I cannot bear.

Yet, because I am sometimes less than I can be, I will cause suffering. May I be thus judged by the sincerity of my intentions, and the purity of my heart, and when it is deserved, may I be forgiven.

I celebrate the way you lived, I wish I could live my life as well. Your courage and love of life was not a minor thing. Therefore, it is now with both sorrow and reverence that I now thank you deer, for giving your life, and I honor your life by pledging that through your death will come sustenance for renewed life.

Now that your spirit has been set free, it can go where it will. However, if you think I am worthy, perhaps you will honor me by allowing your spirit come into my heart where it can live within me and be my counsel. And when life comes full circle for me, may both of our spirits be set free in a better place—

...where the "lion can lay with the lamb", and we will feel sorrow and fear no more.

EXCERPTS FROM THE BOOK OF GENESIS

And God said, Let us make man in our image, after our likeness: and let them have dominion over the fish of the sea, and over the fowl of the air, and over the cattle, and over all the earth, and over every creeping thing that creepeth upon the earth.

And God blessed them, and God said unto them, be fruitful, and multiply, and replenish the earth, and subdue it: and have dominion over the fish of the sea, and over the fowl of the air, and over every living thing that moveth upon the earth.

And God said, Behold, I have given you every herb bearing seed, which is upon the face of all the earth, and every tree, in the which is the fruit of a tree yielding seed; to you it shall be for meat.